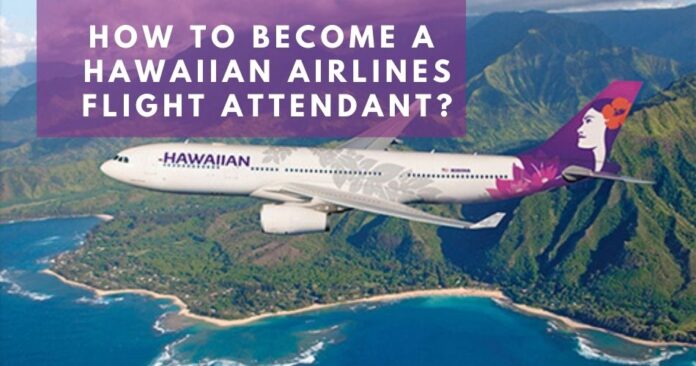 The aviation industry is one of the interesting areas to work in as it offers an opportunity to explore lots of things.

You can fly, travel to various destinations across the globe and enjoy the vibes of aviation by pursuing a career in this industry.

There are lots of areas where you can join as an aviation professional. Some preferred posts are pilot, aircraft engineer, flight attendant, flight operation officer, ground handling staff, Air Traffic Controller (ATC) and much more.

Among various jobs in the aviation industry, a flight attendant is one of the best jobs as it allows you to travel and earn at the same time.

So, in this article, we will be discussing how to become a Hawaiian Airlines Flight Attendant including requirements, training, salary, and other useful information.

Before getting to our topic, let’s explore some basic information about Hawaiian Airlines.

Hawaiian Airlines is one of the major airline companies in the United States with its headquarter in Honolulu, Hawaii. The airline is also listed as the tenth-largest commercial airline in the U.S.

Among these hubs, Daniel K. Inouye International Airport is the primary hub and Kahului is the secondary one.

How can you become a Hawaiian Airlines Flight Attendant?

Hawaiian Airlines announces vacancies for flight attendants on its official website under the careers section. You must keep checking the official site for vacancies and their requirements.

You are required to possess all the requirements set by the airlines to be eligible for applying for the flight attendant post. The major requirements include educational qualification, age, physical appearance including height, personality and much more.

As per the Hawaiian Airlines policy, the following requirements are mandatory to apply for the flight attendant post.

These are the basic requirements for the flight attendant jobs and for more job-specific requirements you need to visit the careers section of the airline’s official website.

The flight attendant applicants with multi-lingual talent must be able to present their speaking and reading capability at a business level. Besides, they also must be able to interpret announcements made in the English language.

The successful completion of all the selection steps will open the door for 6-weeks of initial flight attendant training.

The respective department of the airline will conduct 5 weeks of in-flight customer service training in the first phase. After completion of this training, you will go through emergency and safety training certified by the Federal Aviation Administration, the aviation regulatory body of the United States.

As a flight attendant trainee, you need to pass all the tests and assessments to begin your journey with Hawaiian Airlines.

Hawaiian Airlines launched new uniforms for its employees in 2016 with new designs from Affinity Apparel. Flight Attendants, Aircraft engineers, ground staff, customer service agents and other staff at the company were provided with the new uniforms.

Hawaiian Airlines has a strict tattoo policy as you as a flight attendant candidate aren’t allowed to possess visible tattoos.

This new contract was brought to establish pay guarantees, pay increases and healthcare costs for the Hawaiian Flight Attendants.

As per the Hawaiian Airlines requirement, you are required to fill the online application form and submit it with supporting documents including an educational certificate, passport and other documentation.

The candidates applying for the Hawaiian Flight Attendant post are required to appear in panel interviews, group interviews, and one-on-one interviews where various questions are asked.

Some common questions to be asked during the interviews are listed below.

Flight Attendants at Hawaiian Airlines can earn from $15 to $53 per hour depending upon the experience and seniority level. The average salary is somewhere around $28 per hour.

As per indeed (a popular job search site), Hawaiian Flight Attendants make approximately $50,000 per year which is 52 per cent more than the United States national average.

As per the airline, the benefits mentioned in the list above are subject to change without any notice. This is due to the changing flight attendant agreement contracts that happen with bargaining.

How much does Hawaiian Airlines Flight Attendant make?

Flight Attendants at Hawaiian Airlines can make from $15 to $53 per hour depending upon the experience and seniority status. The average wage is somewhere around $28 per hour.

Is it hard to get a job with Hawaiian Airlines?

You need to go through various tests including physical examination, group interviews, phone interviews, and one-on-one interviews to get selected for Hawaiian Flight Attendant. If you are enthusiastic and have a good personality with sound knowledge, it won’t be that difficult to pass these tests.

Hawaiian Airlines offers 6 weeks of initial flight attendant training to the selected candidates. The first phase of training focuses on 5-week in-flight service training whereas the remaining 1-week period is for FAA emergency and safety certification.

Does Hawaiian Airlines pay for training?