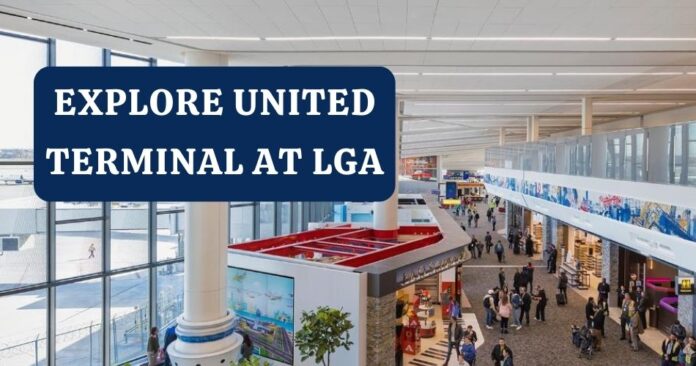 United Airlines is among the top airline companies in the United States that operate flights to various destinations worldwide with a fleet capacity of over 800. The airline also operates a regional carrier ‘United Express’.

United flies to more than 230 internal routes and 118 international destinations across 48 countries on five continents. These flights are operated from 8 hubs located at different airports in the country.

Explore ‘What terminal is United at LGA Airport?’

LaGuardia Airport (LGA) is not the main hub however, it is the key operating airport for United. In this article, we will explore the United Airlines terminal at LGA with the latest terminal guide.

What terminal is United at LGA Airport? (LaGuardia, New York)

LaGuardia Airport (LGA) is one of the major airports serving the New York metropolitan area and is located in East Elmhurst, New York City. It is a primary hub for American Airlines and Delta Air Lines. Besides, it is also the focus airport for United Airlines.

LGA Airport infrastructure is equipped with 4 terminals: Terminal A, Terminal B, Terminal C, and Terminal D. United Airlines, and United Express operate from Terminal B.

As shown in the Terminal Map above, Terminal B, Terminal C, and Terminal D are separated from Terminal A at LGA Airport. Terminal B, C, and D are located next to each other whereas Terminal A is on the left side of the airport entrance.

United operates from Terminal B so, you need to travel to this Terminal for your flight with United. Terminal B can be accessed via Grand Central Park Way.

Once you reach nearby the airport terminal area, you will see Roundabouts, LaGuardia Air Park (Airport Parking Systems), Overlook Park, and GCP Flyover. Just opposite Overlook Park and Air Park, you will find the Terminal B Arrivals and Departures section.

All United departure flights from LaGuardia Airport are operated from Terminal B. Passengers are advised to check their email, or ticket details for terminal-related information.

Like Departures, all United Airlines arrivals at LaGuardia are handled at Terminal B. Passengers can use train service, cabs, public buses, or private vehicles for transportation purposes after arriving at the airport.

Does LGA have a United Club?

United Airlines offers a United Club location between Gates 58, and 57. Passengers can enjoy food, beverages, and relax before their flight.

United Club is a premium airport lounge service offered to eligible passengers. The major amenities of United Club are:

If you don’t have access to United Club, you can enjoy food, and beverages at restaurants in Terminal B.

Some popular restaurants located in Terminal B at LaGuardia Airport are listed below.

LaGuardia Airport offers on-site, and off-site parking spaces where visitors, and passengers can park their vehicle. The parking spaces are available for hourly, or daily rates.

Passengers and visitors arriving at LGA can prepay online and book a premium parking space available at Terminal A, B, C, and D. For that, you need to visit the official website and book your parking by selecting entry date, entry time, exit date, exit time and airline terminal.

United, and United Express passengers can choose Terminal B, and proceed with the online booking system. After that, they need to choose the space available for parking. The system will display the cost, discounts, free cancellation options, facilities and other important details.

Once you ensure the space, you can provide the details asked and then finally confirm your Terminal Parking at LGA.

Besides, passengers can park their vehicles at nearby off-site parking locations for cheaper rates. Airport Parking Reservations is one of the best websites for getting amazing deals on off-site parking spaces which can be easily booked online.

Conclusion on ‘What terminal is United at LGA?’

Let’s end the topic with some key concluding points below.

What terminal is United Airlines in at LGA?

United Airlines operates from Terminal B at LGA. All arrival, and departure flights are handled from this terminal.

What airlines are in Terminal B at LGA?

Are terminals A, and B connected at LGA?

Terminal A is separated from Terminals B, C, and D. Passengers need to use shuttle services to move between Terminals A, and B.

Can you move between terminals at LaGuardia?

Terminals A, and B are accessible via shuttle bus service. Passengers can move between Terminals C, and D with moving walkways as these two terminals are connected by a sky bridge.