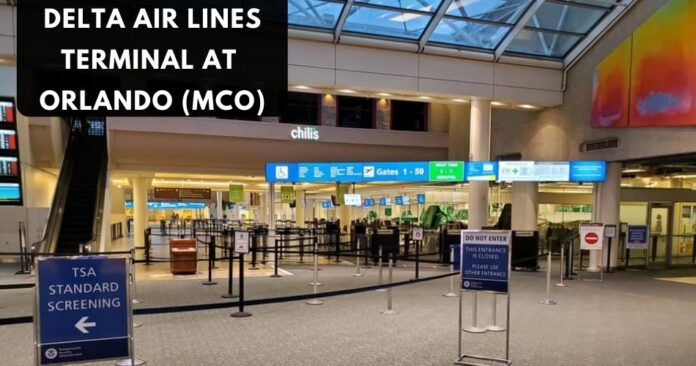 Delta Air Lines is one of the world’s oldest airlines in operation with its headquarters in Atlanta, Georgia. It is also among the major airline companies in the United States.

Delta flies to more than 320 destinations worldwide from 9 primary hubs located at different airports across the country. More than 5,400 daily flights are operated including Delta Connection flights.

Orlando International Airport (MCO) is one of the major airports serving the Greater Orlando region. It is located in Orlando, Florida at an elevation of 96 ft (29 m) above mean sea level (AMSL).

Delta Air Lines operates from Terminal B at Orlando Int’l Airport (MCO). All terminal services including baggage claim, ticketing and security are available at this terminal.

Delta Air Lines operates from Terminal B which is located on the southern side. Terminal B holds three levels; Level 1, Level 2 and Level 3.

Delta Air Lines operates from Gates 70-99 at MCO Terminal B. Ticketing services are available in the B-4 section.

All Delta Air Lines arrival flights are operated from Terminal B at Orlando Int’l Airport (MCO). Delta passengers are required to check their flight status for any circumstances.

Like arrivals, all Delta Air Lines Departures are regulated from Terminal B at MCO airport. Sometimes, the terminal can be changed depending on various circumstances. For that, the airline will inform or you can check your Delta Flight Status online.

Parking Garage A and Parking Garage B are the best parking spots for Delta Air Lines passengers. You can use long-term or short-term parking and easily access Delta Check-in for domestic flights.

Parking Prices are mentioned in the table below.

You can pay for the parking spaces via Cash, American Express, SunPass Plus, E-PASS, Discover, Visa or MasterCard.

Delta Air Lines offers Delta Sky Club Lounge at Orlando Int’l Airport (MCO) which is located at Airside 4 – Center Atrium near Gate 71. The club is operational daily from 4:30 am to 8:30 pm.