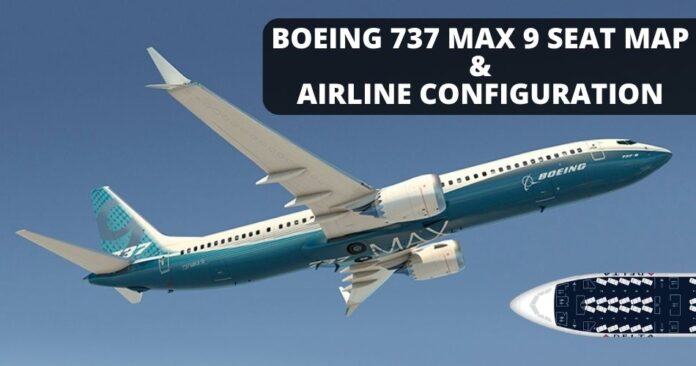 Are you searching for a Boeing 737 Max 9 seat map for various airlines? Aircraft can have unique seat configurations as per airlines’ requirements.

Today, we will particularly talk about the Boeing 737 MAX 9 seat map and configurations. Without further delay, let’s get started with an introduction to MAX 9.

The main attraction of the Boeing 737 MAX 9 is its fuel efficiency and enhanced performance. On the other hand, the interior is designed to look amazing with the all-new innovative Boeing Sky Interior.

The standard seat capacity of 737 MAX 8 on 2-class configurations is 178 to 193. Also, the aircraft can accommodate 220 passengers with a maximum seating configuration.

Now that, we have discovered some basic information about MAX 9 aircraft and its seating capacity, let’s move forward to explore the seat map of various airlines operating flights across the world.

Among various fleets used by United, there are 34 Boeing 737 MAX 9 in operation. The seating layout and configurations are available in three different versions as shown in the table below.

Alaska Airlines is among the major carriers in the United States and is also the sixth largest airline in North America in terms of fleet size, destinations served and scheduled passengers carried. It is a member of the Oneworld alliance and headquartered in SeaTac, Washington.

Alaska operates flights to over 119 destinations with more than 320 fleets from Boeing and Airbus. At present, the airline operates 194 Boeing 737 series aircraft out of which 28 are Boeing 737-700.

The seat map, capacity and configuration of Alaska Airlines B737-900 are illustrated in the table below.

Icelandair is the national flag carrier of Iceland with its headquarters in Reykjavik, Iceland. The airline operates flights to over 50 destinations with 41 aircraft.

Copa Airlines is the national flag carrier of Panama and is headquartered in Panama City. It is also a member of the Star Alliance and operates flights from its primary hub at Tocumen International Airport.

The airline operates flights to various destinations with over 80 aircraft. Out of 80 aircraft, it operates 17 Boeing 737 MAX 9 jetliners.

Aeromexico is the national flag carrier of Mexico headquartered in Mexico City. It is a member of the SkyTeam and SkyTeam Cargo alliance.

Aeromexico Boeing 737 MAX 9 can carry a total of 181passengers. Clase Premier cabin is equipped with 16 Recliner seats in a 2-2 configuration. AM Plus and Economy class cabins are filled with 18 and 147 standard seats in a 3-3 configuration respectively.

We have discovered Boeing 737 MAX 9 Seat Map on various airlines. There are many other airlines operating MAX 9 jets in the world and the seating configuration is unique among them.