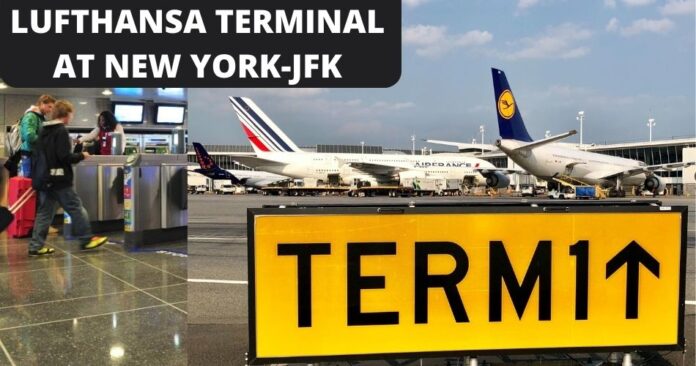 Lufthansa is the national flag carrier of Germany with its headquarters in Cologne, Germany. It is also a member of the Star Alliance and is recognized as the second-largest airline in terms of passengers served.

Lufthansa operates flights from its primary hubs at Frankfurt Airport and Munich Airport. It flies to over 211 destinations in 74 countries across the United States, Asia, Europe and Africa.

John F. Kennedy International Airport (JFK) is one of the popular destinations covered by Lufthansa. In this article, we are going to explore Lufthansa Terminal at JFK Airport, New York.

The airport infrastructure features six terminals including Terminal 1, Terminal 2, Terminal 4, Terminal 5, Terminal 7 and Terminal 8. Terminals 3 and 6 are skipped because they were demolished in 2013 and 2011 respectively.

At present, Lufthansa operates from Terminal 1 at John F. Kennedy International Airport (JFK). All necessary terminal facilities and services are available at this terminal.

Terminal 1 is located opposite the Green Parking Zone and is accessible via shuttle services, bus, AirTrain or private vehicle. Lufthansa operates from this Terminal at JFK.

All Lufthansa Departure flights from John F. Kennedy International Airport (JFK) are handled from Terminal 1. Passengers can check their flight status for terminal changes which can happen due to various unscheduled events or circumstances.

Like Departures, all Lufthansa Arrival flights at New York–JFK airport are operated from Terminal 1. In case of terminal changes, passengers can contact the airline’s representative or keep updated with the flight status.

Besides, Lufthansa also operates flights to various other destinations including Africa, Asia and Europe from JFK Airport.

The popular destinations from New York–JFK covered by Lufthansa are listed in the table below.

Shuttle services, private vehicles, AirTrain or Public buses are available at JFK for travelling across the terminals. JFK AirTrain is the best choice as it operates 24 hours a day and connects all of the JFK terminals with rail and metro stations.

Lufthansa First Class Lounge is located in Terminal 1 Departure area (Left after Security Control) and is open daily from 12:30 till 21:30.

Lufthansa Senator Lounge is also available in Terminal 1 Departure Area (Left after Security Control) and is open daily from 09:30 to 21:30.

Amenities offered by the Senator Lounge

You can also find Lufthansa Business Lounge in Terminal 1 Departure Area (Left after Security Control) which is open daily from 09:30 to 22:45.

Amenities offered by the Business Lounge

We have come to the end of this article as we explored Lufthansa Terminal at JFK Airport with every detail including the JFK Terminal Map, Lufthansa JFK Arrivals/Departures information, parking facility, terminal services & amenities, Emirates Lounge facility and other important terminal guides.

With that, let’s conclude by listing some key points on Lufthansa Terminal at JFK.

FAQs on Lufthansa Terminal at JFK

Which terminal is Lufthansa in JFK?

Which airlines are in JFK Terminal 1?