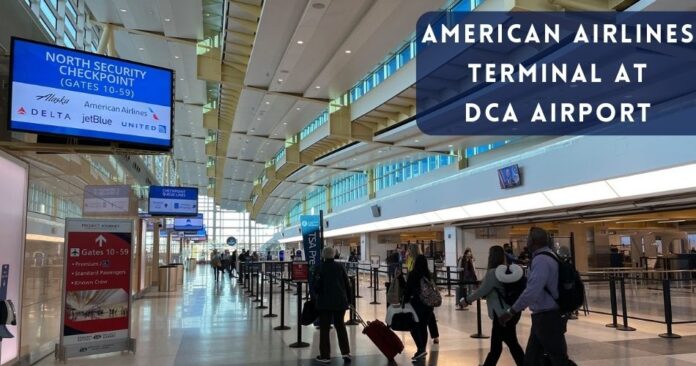 American Airlines (AA or AAL) is the largest airline in the world in terms of fleet capacity, scheduled passenger carried, and revenue passenger mile.

AA flies to more than 350 destinations from 10 hubs located at different airports across the country. Washington-National,

Ronald Reagan Washington National Airport (DCA) is one of the 10 primary hubs for American Airlines. We have prepared this article to our readers know ‘What terminal is American Airlines at DCA Airport?’.

What terminal is American Airlines at DCA Airport?

American Airlines operates from Terminal 2 (Concourses C, D, and E) at DCA Airport. All terminal services including baggage claim, ticketing, and security are available at this terminal.

Reagan Airport changed its terminal information recently. Terminals A, B, and C have now been changed to Terminal 1, and Terminal 2.

All American Airlines departure flights are operated from Terminal 2 at DCA Airport.

Like departures, all arrival flights are handled from DCA Terminal 2. Facilities including baggage claim, security clearance, animal relief area, self-service check-in, and so on are available at the arrival terminal.

Does DCA have an Admirals Club?

To access the Admirals Club, you need to purchase a single visit pass, become a qualified passenger for First and Business, become qualified for AAdvantage, or obtain an Admirals Club membership.

Where do you park at DCA for American Airlines?

Ronald Reagan Airport features parking lots in its vicinity. Visitors and passengers can park their vehicles by paying hourly, or daily charges. Parking 1, Parking 2, and Economy Lots are available at DCA Airport.

For American Airlines customers, Parking 2 is the best location as it is connected to Terminal 2 (Gates B10-E59) via covered walkways. Besides, there are shuttle services available to all terminals. You can find electric vehicle charging stations inside Parking 2 on the ground level.

Conclusion on ‘What terminal is American Airlines at DCA?’

As we come to the end of this blog, we explored American Airlines Terminal at DCA Airport with the terminal map, gates information, arrivals/departures, Admirals Club amenities, Parking facility, and much more.

What airlines are in Terminal 2 at DCA?

Can you walk between terminals at DCA?

How early should you arrive at DCA?

The DCA Airport authority advises passengers to arrive 90 to 120 minutes before their scheduled departure to ensure they have plenty of time.