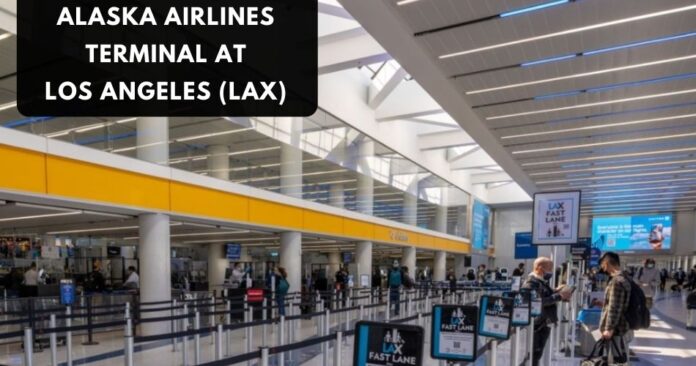 Alaska Airlines is one of the major carriers in the United States with its headquarters in SeaTac, Washington. It operates regular scheduled commercial flights to various destinations across the country. Besides, Alaska operates additional flights via codeshare agreements with other airlines across the globe.

LAX is the primary hub for major airlines in the US including Alaska Airlines, American Airlines, Delta Air Lines, United Airlines and Polar Air Cargo. Besides, it is also the focus city for Allegiant Air, JetBlue Airways and Southwest Airlines.

The airport is equipped with 9 terminals (Terminal 1, 2, 3, 4, 5, 6, 7, 8 and B) with a total of 146 gates arranged in the shape of the letter ‘U’ or a horseshoe. Terminal B is known as the Tom Bradley International Terminal from where international flights are handled.

At present, Alaska Airlines operates from Terminal 6 at Los Angeles Int’l Airport (LAX). All terminal services including ticket counter and baggage claim are available at Terminal 6.

As you can see LAX Terminal Map in the picture below, the 9 LAX terminals are designed in the shape of the letter ‘U’. Terminals 1, 2 and 3 are located on the northern side whereas Terminals 4, 5 and 6 are on the southern side. Tom Bradley International Terminal (TBIT) lies between Terminal 4 and Terminal 3.

Terminal 6 is opposite Terminal 2 from where Alaska Airlines, Advanced Air and Southern Airways operate their regular passenger flights.

Talking about the gates information, Alaska Airlines operates from Gates 60 – 69 at Terminal 6. Due to ongoing construction, passengers might have to use Terminal 5 (Gates starting with number 5; 50, 52, 54, etc.).

Ticket Counters are open at all gates daily from 4 am to 10:30 pm for domestic flights and 4:30 am to 11 am for international flights. Alaska accepts checked baggage during these ticketing hours and no more than 4 hours prior to the flight departure. So, passengers are required to arrive at the airport 2 hours prior to the scheduled departure time.

All Alaska Airlines arrival flights are handled from LAX Terminal 6 however, international flights arrive at Tom Bradley International Terminal (TBIT or Terminal B). Terminal services including Ticket Counter and Baggage Handling are provided from Terminal 6.

Like Arrivals, all Alaska Airlines Departure flights are operated from LAX Terminal 6. Due to ongoing construction, passengers might be required to use Terminal 5 (Gates starting with a number 5).

You will find seven parking locations between the nine terminals at Los Angeles Int’l (LAX). The available parking spaces include Parking 1, Parking 2A, Parking 2B, Parking 3, Parking 4, Parking 5, Parking 6 and Parking 7.

Parking locations 1, 7, 6 and 2A are close to Terminal 6 so, Alaska Airlines passengers can use these spaces to park their vehicles.

LAX delivers a reserved parking system with which you can book and pre-pay for parking spaces online. You can get a free shuttle service to the terminal and avoid delays by pre-booking parking at LAX.

Alaska Airlines offers Alaska Lounge at LAX Terminal 6 which is located on the mezzanine level near Gate 64. This premium lounge service is available daily from 5 am till 9:30 pm. To enjoy the amenities offered by the Alaska Lounge, passengers are required to purchase a membership online via the airline’s official website.

Talking about drinks and beverages, Alaska Lounge Members can enjoy fresh Starbucks coffee including lattes and Cappuccinos. Besides, they can also refreshen with the Teavana tea while waiting for the flight.

On the beverages and cocktails side, passengers can enjoy West Coast wines, local brews and custom-crafted cocktails. Bloody Mary is the famous cocktail available at the Alaska Lounge. Note: Beverages and Cocktails are subject to local restrictions.

Alaska Airlines has its own Lounge facility at LAX however, it is available to the members only. If you are not a member of Alaska Lounge, you can visit any of the restaurants listed below and fulfil your hunger.

Some famous restaurants around LAX Terminal 6

We have come to the end of this informative blog and explored Alaska Airlines Terminal at LAX including the Terminal map, arrivals/departures information, parking facility, Alaska Lounge, Restaurant, Gates information and much more.

Due to ongoing construction at LAX Terminal 6, Alaska Airlines can operate from Terminal 5 or other terminals. So, passengers need to check their flight status for exact terminal and gate information. After completing of construction works, only Terminal 6 will be used.

Let’s conclude with the key points listed below.

What Terminal is Alaska Airlines at LAX?

How many gates does Alaska Airlines have at LAX?