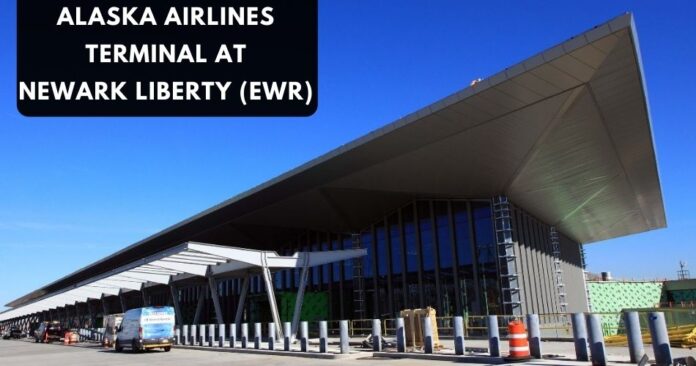 Alaska Airlines is among the major carriers in the United States with its headquarters in SeaTac, Washington. It operates flights to various destinations in the US, Mexico, Costa Rica, Belize and Canada with a fleet capacity of over 300 including Boeing 737, Airbus A320 and Embraer E175 aircraft.

At present, Alaska operates from primary hubs in Seattle/Tacoma, Anchorage, Los Angeles, Portland and San Francisco. Besides, San Jose and San Diego are the focus cities.

Today, we will discuss ‘What terminal is Alaska Airlines at Newark?’ in this informative blog. Terminal Map, Gates information, arrivals/departures, Lounge Amenities, Parking facility and much more will be covered.

Talking about the airport infrastructure, EWR holds three terminals with a total of 121 gates. Terminal A, Terminal B and Terminal C are the three EWR terminals that accommodate 29, 24 and 68 gates respectively.

Alaska Airlines operates from Terminal B at Newark Liberty International Airport (EWR). All terminal facilities including baggage claim, ticketing and security are available at Terminal B (Level 2).

Facilities and Services available at EWR Terminal B

As you can see in the terminal map above, Terminal A, Terminal B and Terminal C are arranged in an oval shape. Terminal C is located on the northern side whereas Terminal A is on the Southern side. Terminal B is between Terminals C and A from where Alaska Airlines operates regular commercial flights.

Alaska Airlines operates from Door 1 located in Level 2 at Terminal B. Passengers are required to check monitors for concourse information. Ticket Counters are available at Door 1 (Level 2), Terminal B which are open daily in two shifts; 4:30 am to 8:15 am and 2:30 pm to 8:30 pm.

Baggage Claim service is provided at Carousel 4 (Level 1), Terminal B and is open 10 minutes prior to flight arrival and 40 minutes after.

Those travellers without bags can reach the airport 2 hours prior to the scheduled departure time.

All Alaska Airlines Departures from Newark Airport are handled from Terminal B. Concourse information and other flight details are displayed on the monitors so, passengers need to check the monitors for flight information.

Other airlines in codeshare agreements with Alaska operate codeshare flights labelled as Alaska Airlines from EWR Terminal A.

Alaska Airlines offers a mobile application to check your flight status. OR you can visit the official website and go to the Flight Status page to check the active status of your flight with Alaska.

You need to input your departure date, flight number or flight origin and destination to check the status of your flight. Read this detailed technical guide to track and check flight status.

Alaska Airlines passengers can use these parking areas by paying certain applicable fees.

America Airlines Admirals Club is located at Terminal A, after security towards gates 30 through 39 and is open daily from 4 am to 7:30 pm.

Some major amenities offered by the Admirals Club

We have come to the end of this informative blog where we answered ‘What terminal is Alaska Airlines at Newark?’ with a terminal map, gates information, arrivals/departures, lounge amenities, parking facility and much more.

What terminal is Alaska Air in Newark Airport?

What airlines are in Terminal A at Newark Airport?

Air Canada, American Airlines and JetBlue Airways are in Terminal A at Newark Airport.

Where does Alaska Airlines fly from Newark?