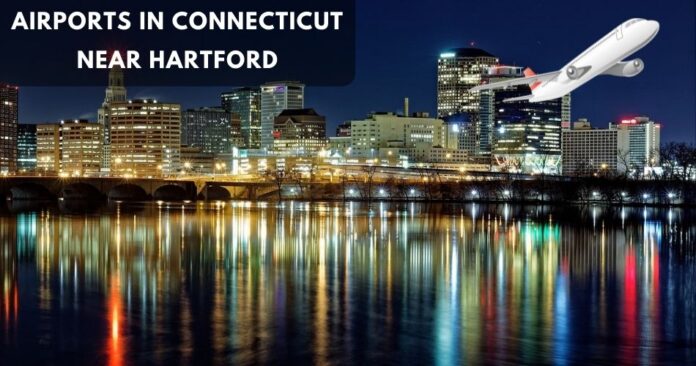 Connecticut is a state in the United States surrounded by Rhode Island, Massachusetts, New York and Long Island. It covers a total area of 5,567 square miles and is listed as the 29th most populous and the fourth most densely populated state.

Taxation, real estate, energy and industries are the major sources of economy in Connecticut. Talking about the transportation facilities, roadway, railway, airway and ferry service is available.

In this article, we will particularly focus on discovering all the airports in Connecticut near Hartford and New Haven.

Major Airports in Connecticut near Hartford

Harford is the capital city of Connecticut state and there are three nearby airports namely Bradley International Airport, Hartford-Brainard Airport and Robertson Airport.

Bradley International Airport (ICAO: KBDL, IATA: BDL, FAA LID: BDL) is one of the airports in Connecticut near Hartford that offers commercial services to various domestic and international destinations.

BDL is owned and operated by the Connecticut Airport Authority and serves Hartford Region in Springfield. The airport resides at an elevation of 173 ft (53 m) above mean sea level (AMSL).

Talking about the terminal facility, BDL is equipped with a passenger Terminal A that holds two Concourses (East and West Concourse). East Concourse holds Gates 1-12 whereas West Concourse accommodates Gates 20-30.

US Carriers like American Airlines, Eastern Airlines, Colonial Airlines and others operated commercial flights to and from HFD until the new Bradley Int’l Airport came into action.

At present, the airport doesn’t operate any commercial flights so, there are discussions going on to close the airport and use the space for other economic purposes.

Robertson Airport (known as Robertson Field)  is a small public-use airport located in Harford County, Connecticut. The airport sits at an elevation of 202 ft (62 m) AMSL and serves the Plainville region.

Airports in Connecticut near New Haven

There are two nearby airports in Connecticut near New Haven and they are Tweed-New Haven Airport and Meriden Markham Municipal Airport.

Tweed-New Haven Airport is one of the airports in Connecticut near New Haven situated at an elevation of 12 ft (4 m) AMSL. This is a public-use airport owned and operated by the City of New Haven under the Tweed-New Haven Regional Airport Authority.

After Bradley International Airport in Connecticut, HVN is the other airport offering regular scheduled commercial flights to and from Connecticut.

Meriden Markham Airport (ICAO: KMMK, FAA LID: MMK) is a small public-use airport in Connecticut near New Haven. It is situated at an elevation of 103 ft (31 m) and is owned by the City of Meriden.

MMK is categorized as a general aviation airport so, there aren’t any commercial flights conducted to and from the airport. Talking about the infrastructure, MMK covers a total area of 157 acres (64 ha) and features a single asphalt runway 18/36 with a dimension of 3,100 ft by 75 ft (945 m by 23 m).

In this article, we discovered all the airports in Connecticut near Hartford and New Haven. There are 5 airports located in this region however, only 2 offer commercial services.

What major airports are in Connecticut?

What is the main airport in Hartford Connecticut?

Bradley International Airport (BDA) is the major airport in Hartford Connecticut as it offers commercial flights to various domestic destinations operated by major US airlines.

What is the closest airport to New Haven CT?

Tweed-New Haven Airport (HVN) is the closest airport to New Haven CT as it is just 4.7 miles away and you can reach it by driving for 16 to 20 minutes.

What airlines fly out of Hartford CT?